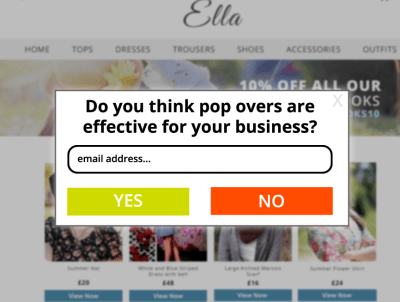 Fresh Relevance offers Popover subscribe forms now. So the big question for our clients is - are Popover forms any good?

We all have our own opinions: and ours is that you wait until shoppers have had a chance to see your site contents before you hit them with a Popover form.

But I'm sure you'll agree that what really matters are facts. So we're going to research different options, using our marketing site, and tell you what worked best for us.

Opt-In Pop-Ups: Are They Any Good?

While we're waiting, I found a great article that aggregates about 20 Popover case studies, by George Mather at CrazyEgg.

I picked 6 examples from it that caught my fancy (mostly from near the start) and - most important - checked to see whether the sites from these successful studies were still using Popovers.

Nikki McGonigal, a food craft blogger, started testing out with both sidebar and lightbox forms for opt-ins. After 8 months, when she compared the results, she found she had 1375% more subscribers. The sidebar form had a subscription rate of .4% while the lightbox form converted at 5.5%.

AskLeo.com drove just 10 to 15 subscribers despite getting 44,000 unique visitors every day. Site owner Leo found a hover box set at a delay of 60 seconds was capturing the most emails. He was now getting 100 to 150 subscribers on a daily basis.

This simple Popover, which doesn’t even directly ask for emails, is the third biggest lead generator on Usertesting.com.

Syed Balkhi of WP-Beginner saw a 600% lift in email opt-ins when he used Optin Monster’s exit-intent Popovers and no increase in bounce rate.

Want to find out more?