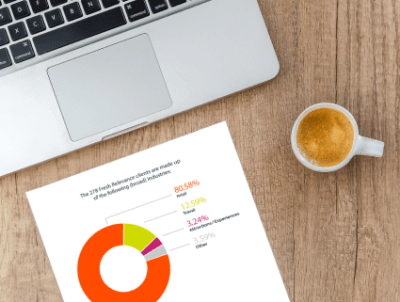 The coronavirus pandemic has had a colossal impact on the way people live their lives in 2020. With rules and guidelines constantly being updated and revised, consumers have had to adapt their social, shopping and travel habits sometimes at a moment's notice. This has wide-ranging ramifications for marketing and eCommerce.

To help you benchmark your online sales performance against your peers, we have been looking at the impact of Covid-19 on 250+ Fresh Relevance clients in a variety of industries from March to September 2020.

Looking at the total impact across all industries including retail, travel, media and others, it is clear, despite an initial decline when social distancing measures were first introduced in March, that online spending has increased significantly.

Online spending peaked towards the end of June and throughout July when lockdown measures had recently been lifted and people began to spend more time outdoors with friends and family, and returning to work.

Since this peak, online spending on the whole has settled, but stayed above the average revenue seen by businesses prior to Covid-19 restrictions, showing a general shift in consumer spending habits towards preferring to shop online than on the high street.

There are definitely some outliers in this data that have performed extremely well which has brought up the average revenue, compared to the median revenue. Looking at a breakdown by industry and then further into verticals will give an indication of which industries have seen the most dramatic change, and whether it has affected them long term.

Retail has seen the most significant revenue growth of the industries analysed, especially since restrictions were lifted and consumers shopped for products to facilitate their return to a more normal work and social life. Revenue was on average at almost 300% pre-covid levels at the beginning of September 2020. The median revenue for retail has been less high and more consistent, sitting again at 126% at the beginning of September, showing that we have to drill down even further to see which verticals within retail have been performing well and bringing up the average.

Media on the other hand, whilst also seeing significant growth, mostly saw this during the months of a full lockdown when consumers were turning online for all their news and entertainment. Media revenue at the end of September remained above pre-Covid levels at an average of 115%. However, the median revenue for media was 86%, showing that whilst some companies are performing well, most have seen a steady decline in revenue since social distancing restrictions were lifted.

Travel and attractions/experiences have seen fairly similar trends throughout the past 6 months. When travel restrictions were in place and social distancing guidelines were strict, revenue was very low. When restrictions lifted, revenue increased, and did in fact exceed pre-covid levels for a number of weeks. Travel has seen a decline again, starting September, at an average of 84% of usual revenue. This comes as quarantines have been placed on holidaymakers returning from abroad, and also as schools have reopened. Attractions and experiences have continued to climb through to the beginning of September as families and friends looked for entertainment and a break from the usual closer to home.

Other industries, including charities, education and recruitment have seen a much more varied change in average revenue, and also in median revenue.

Who is doing well in retail?

As you can see in the above graphs, retail as a whole has performed very well since the beginning of March. This increase in revenue varies in significance between different verticals.

One takeaway highlight has been fashion. Throughout the lockdown months, fashion performed well, sitting consistently around 150% normal revenue. Since social distancing restrictions have been reduced, fashion has seen a massive increase in revenue, beginning September at 525% normal revenue as people have returned to work and school. This same pattern can be seen for the home/garden industry and also to a lesser extent for jewellery/luxury goods, which in the earlier months saw revenue drop to as low as 61% but at the beginning of September was at 146%.

Toys/games were leading the way throughout the lockdown months, as parents looked for ways to keep their children entertained whilst at home. As measures were lifted this revenue increase declined until it sat at 103% normal revenue at the beginning of September when schools returned. Books/film is another industry which has seen some large spikes throughout the past few months as consumers looked for entertainment.

Verticals well suited to supporting #stayhomesavelives have done consistently well, and have largely kept that momentum going. This includes tobacco/vaping, sports/hobbies, food/drink, health, beauty and pet supplies. It may be that as time goes on we will find that people have shifted to permanently buying these types of items that many consider necessities online.

Some industries that are performing, or have performed less well as a result of Covid-19 have been automotive, insurance/finance, office supplies and more recently technology. Automotive has in more recent months seen an increase in revenue and in June started to see themselves around or exceeding pre-Covid levels. Technology on the other hand started out well, reaching as high as 254% normal revenue, but in the first week of September dropped down to 72% normal revenue. Insurance/finance and office supplies however, have consistently seen their revenue sit below their usual pre-Covid level, as despite some return to offices and normal life, the demand still isn’t as high as it usually would be.

The impact on the travel industry

The travel industry has been hit hard by Covid-19, largely due to the need to stay at home in order to combat the spread in the first few months. When travel restrictions were lifted, travel started seeing a steady growth in revenue.

This was especially prominent for staycations, as many holiday makers decided to spend their summers closer to home in case of any change in guidelines and restrictions. Revenue reached 439% normal revenue at the end of June as people booked last minute staycations. This has since dropped back down to 162% normal revenue, which is still significantly higher than pre-Covid levels, but reflects normal holiday patterns as children return to school.

Hotel online revenue has remained more consistent since restrictions were lifted, and has been above pre-Covid revenue. Travel abroad and coach/cruise holidays, whilst remaining fairly consistent since lockdown lifted, have remained below usual levels of revenue as people still have reservations about travel abroad or not being able to rely on their own transportation.

What does this data mean for marketers?

These numbers can act as a benchmark for your business, but with the festive season around the corner your marketing will be more important than ever to stand out online and take advantage of the flood of shoppers on the internet.

We worked with Censuswide and polled 2,000 nationally representative consumers in the UK to create the New Normal Festive Shopping Report, which can give you all the answers on what consumers are looking for in their seasonal shopping experience.