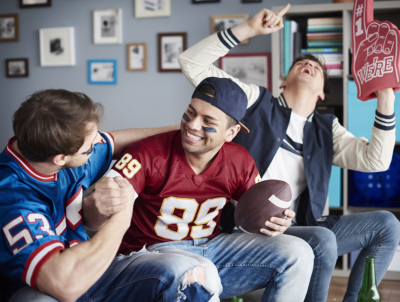 The Super Bowl is on February 4th; the biggest sporting event of the year stateside. Did you know that on Super Bowl Sunday, Americans will drink 325.5 million gallons of beer and devour 1.25 billion chicken wings?

But the Super Bowl is not just a stand out event for sports fans and chicken lovers; it’s also a huge day in advertising and marketing. Last year, 111.3 million people watched the Super Bowl, so with such a large engaged audience, it’s the perfect time to get people talking about your brand. The biggest brands will shell out millions of dollars for even 30 seconds of screen time during this year’s Super Bowl, with campaigns planned over the months leading up to the event. But another great way to grab the attention of viewers is to use real-time content based on what’s happening at the time to make sure viewers see your brand as relevant as they scroll on their phones throughout the day!

Here are a few of our favorite examples of real-time campaigns from previous years to help you get the ball rolling:

Back in 2012, Coca-Cola used real-time marketing in their 60-second advert at the Super Bowl. The brand had three adverts ready to go, but only two slots. The first slot was a 30-second advert that would introduce two polar bear mascots watching the game, drinking Coca-Cola and supporting different teams. The next slot was for one of their two 60-second adverts that continued with the two polar bears watching. The company would choose which advert to play depending on which team the game was in favor of by the time it came to the second slot. One advert would be shown to display the Patriots leading the game, and the other would show the Giants ahead of their competition. Coca-Cola also brought the campaign across to their social media with tweets and Facebook posts in the voices of the characters in the adverts.

Real-time content isn’t just limited to TV adverts, and in terms of using real-time social media marketing during the Super Bowl, Oreo led the pack when there was a blackout during the 2013 Super Bowl. The world famous cookie company published a simple tweet that read “Power out? No problem.” with an image of an Oreo cookie on a dark background with the phrase “You can still dunk in the dark”. This quick tweet from Oreo that was in line with what was happening at the game achieved over 15,000 retweets and a large amount of press coverage in not only the days following but also the years. People still talk about this real-time content from Oreo today in relation to memorable Super Bowl campaigns, and Oreo has already nodded back to the post in their tweet about the recent CES blackout:

We’ve already spoken about how the Super Bowl is not just a day for sports but also a day for food, but the California Avocado Commission went the extra mile with their real-time social media campaign in 2016. Everybody loves a bit of crushed avocado on toast but the California Avocado Commission took to Twitter to show Super Bowl viewers numerous other ways they could be enjoying the fruit while watching the game. Every time a food or drink commercial was shown during the Super Bowl the business tweeted an original recipe video demonstrating how whatever was being advertised could be eaten with avocados. This included products from Budweiser beer to Mars’ Snickers.

Using real-time content in your Super Bowl strategy doesn’t have to be as expensive or extravagant as a 30-second television advert during the game. Walgreens used a countdown timer in its email campaign counting down to the start of the game alongside promotions for snack foods to buy for the game. Walgreens did this to create a sense of urgency around the start of the game for readers who are looking for the best deals on snacks for them and their guests, encouraging them to buy from the retailer.

Last year, Hyundai used the opportunity of the number of people watching the Super Bowl to draw the audience’s attention to something a little more serious: the work of the military. They did this in real-time, by shipping fully immersive live-streaming pods to a military camp oversees, so that soldiers could watch the game in a way that feels like they were actually at the stadium. While the game played, Hyundai filmed footage of the experience at the camp and created a commercial from this to play during the day. The soldiers also got to experience this with their families via technology, by live streaming them to their families at the stadium, and their families to them at the camp.

This year, Kraft Foods is combining its social media platforms with a televised commercial during the game, as well as getting the public involved. The business is requesting its followers to share images of them with their friends and families during the Super Bowl via social media. Kraft Foods will then sift through them and select their favorite images to create a 30-second commercial during the second half of the game, giving their customers the chance for their faces to be on screens all over America on a day where millions of people will be watching!

The gift of personalization - customize your marketing